At the start of the School of Adventure club, I did my best to simplify the character creation process. It is still complicated, especially making characters for six beginner players at once. I think I’ve learned some lessons.

There’s an appetite for RPGs in primary schools

The school agreed readily to my pitch. I sent over a few lines about how educational tabletop roleplaying games are and how I had adapted the game for the age group, but I didn’t have to do any further persuading. I think it helped that the office manager had had a university friend who was a gamer, and I got support from the librarian when we got talking about my kids going to her creative writing club. But for whatever reason the school was very receptive.

With a flyer emailed out by the school, a follow-up via some parent phone chat groups, and a bit of word-of-mouth from my son, I got 11 paying customers (plus my own kids) out of no more than 150 eligible pupils, which I think is a good ratio. Apparently it is one of the biggest starts they’ve seen for a parent-run activity.

I distilled my selection of five class, six race and nine background options onto summary cards. The kids passed them around, looked at them and discussed before choosing. That worked pretty well. Illustrations on some of the cards helped.

I found the popular races were Elf then Orc, with a couple of Humans. No takers for any short races.

The popular classes were Rogue then Cleric then Wizard, with a Barbarian and a Fighter. There are four rogues in one party of seven and I suggested one or two should change but they’re all sticking to it. I couldn’t even persuade the one who wanted from the start to be able to do ice magic to pick wizard—he just used his elf cantrip for Ray of Frost.

Favourite background was Outlander followed by Noble, Acolyte and Sage, and an Urchin and an Entertainer. Folk Hero, Soldier and Guild Artisan were clearly all too mundane.

What do we learn from this? Simple choices from short lists of options, clearly presented, work fine. My kids wanted their characters to be impressive and exciting, and many of them sneaky.

The finer points were a bit less smooth. Everyone needs to choose class skill proficiencies, and weapons. Most choose armour, and at least one class option like spells, domain, fighting style or expertise. Many characters had race or background free-choice languages.

I had printed out class choice sheets to guide them through, but they were not quite enough. I had listed class skills, but there were lots of questions and confusions about what the skill names meant.

I had included on the sheets the Equipment menus from the PHB class descriptions, but for Fighter and Barbarian these have entries like ‘any martial weapon’, so I had printed a simplified copy of the main weapon lists. In one group the cleric players also got hold of this, and the main thing that stood out as differentiating the weapons was damage, so they chose high-damage weapons off this list (rather than the one-handed options from the Cleric class rules) and I didn’t like to say no too much. Actually, I’m looking forward to the Orc Tempest Cleric dishing out some righteous 2d6+3 maul damage, so we’re failing forward.

But I think in future I’ll provide simpler, clearer, more complete choice sheets, and be very clear that they are to be gone through in order. If I have to omit some options I consider less usable, so be it. I may even ignore languages.

Oh, and ability scores. I looked between sessions at everyone’s class, weapon, skill and personality choices and figured out what scores I thought would suit them (PHB array for equality between players). Then I filled out the numbers for them and next session handed over the completed sheets with the option to change things if they thought different. No-one wanted to change any so I feel that was a good way to do it. 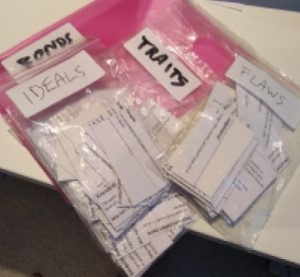 I also created cards for choosing Traits, Ideals, Bonds and Flaws. I liked this framework when I saw it in the 5e PHB but, having created a character or two with my own kids at home, we were finding the 6-8 options tied to each background a bit restrictive. So I picked a largish selection of options from across all the backgrounds and made them freely available, putting them on choice cards with snappy titles as well as sentences in character voice. I also found common threads across some of the backgrounds, especially in Bonds, so I amalgamated and generalised some of the options, with prompts to come up with specifics for a Bond like ‘Roots’.

Most of the players were pretty enthused about this, and chose multiple options in each category – we’ll have to see how this comes through in play.

There was a very wide spread of personality traits, with independence and self-will being the most popular, and steeliness, boastfulness, joking, bluntness, determination and action-orientation also getting more than one pick. Also a couple who wanted to be peacemakers.

Self-interest was the most popular Ideal, followed by creativity, and a couple for mutual tolerance and freedom. Other than that there was again a wide spread.

The most popular Bonds were commitments to other PCs, either selected individuals or the group as a whole. Also several chose to have a rival or a nemesis, though I don’t think anyone came up with specific details straight away. We’ll work on that soon.

I’ll talk about Flaws below.

An hour is a short session, and character creation takes time

With my optimistic head on, I had kind of hoped to get character creation done in the first session, maybe two. But we only get about an hour of the actual activity in the after-school slot and, even with a simplified process, creating six characters for new players took over two hours. One set of players had a bit more initial familiarity with adventure games of various sorts and stayed fairly focused on the technical questions like skills and weapons; they had their characters mostly done in two sessions, and used the third session for description and appearance, and a roleplaying scene gathering intelligence about the first dungeon. The other group had some players who were more confused or put off by the nuts and bolts, and they took most of two sessions over that, and personality went into Week 3, leaving only a short time for the intelligence-gathering roleplay. But they loved the personality choosing and got into the rapidplay dialogue, and we finished that phase of the club on a high.

Kids ask a lot of questions

I know, right? But *really* a lot. Plenty of grown-up clarifying details to gladden my nerdy little heart, but also lots of out-there hypotheticals born of wild imagination. I think, especially when they are getting into a new activity, they want to find the boundaries of what is possible and what is expected in this framework.

And they shout out their ideas as soon as they have them, they comment unreservedly on each other’s choices, and while you’re engaged with one others are getting bored and starting to do their own thing—if possible, under the tables. It’s a chaotic kind of fun. I salute the professionals who handle groups four or five times this size all day long.

If, like me back in the day, you learnt the game from the rulebooks, you might for your early character building have mostly stuck to the options offered in the rulebooks. But teaching the game to the kids orally I found them running ahead of me and going way off-piste with all sorts of ideas for making their characters awesome. One player had written out their character concept of “enchantments and ice; shooting, sneaking, speed” before I had finished saying it was time to choose a race. I had a player demanding a baby bronze dragon as a pet, and another wanting to be a vampire. Between them they’ve got red skin, black skin, blue skin, red hair, blue hair, orange hair, red eyes, white eyes, stormy grey, and an eyepatch.

I love it. I’ve said yes to all the cosmetic stuff. The baby bronze dragon is firmly offstage but might make an appearance as an NPC in a few levels’ time. I have vetoed all undead powers, but that one character still insistently self-identifies as a vampire, which is fine by me as a personality schtick.

Which leads me to…

Well, edgy perhaps isn’t quite the right word. A few *are* genuinely keen to explore dark sides to their characters and stories: one novice player interrupted my introduction with “Ooh, is there dark magic? Hey, can I be *evil*?!” and eyes wide with glee (and yes, it was the vampire). But I think, more than that, they are keen to make their characters hard and strong, without being perfect in a people-pleasing or conventional way. So across the thirteen characters in the two groups, there are six Rogues. There are characters called The Dreaded Shadow and The Icicle. Personality traits like “I never show fear” are popular, but the part of the characterisation framework that really got them going was the Flaws. One player chose seven. Even the kid who was so disdainful of characterisation at the start that they put Personality: Doesn’t Care and Ideal: Jelly was sufficiently intrigued by Flaws that they chose two from the cards I handed out. And the popular flaws are not overt vulnerabilities, but rough edges like holding grudges, judgementality, or not admitting being wrong. Even the liabilities are active and heroic, like risk-taking and things they can’t resist doing.

Kids really want to play with their friends. It is clear that deciding to sign up for the club happened mainly in groups of friends who talked about it together. I initially worked with the parents to sign each child up to the day that best fitted their weekly schedule. But as soon as the kids found out their allocated days and started comparing notes I got I think three requests to transfer into a group with more of their classmates. The one kid who comes on a different day from their buddies several times wandered over to them in the rendezvous area, and had to be sent back to the other club they’re signed up for that day.

Also, players in both groups spontaneously chose each other’s characters as their Bonds, and again within those classroom/playground pre-existing friendship groups. I hope that friendships will strengthen across the classes, year groups and genders through the club, but at the moment, the social aspect with their existing friends is really strong.

(Please note that copyright in the hand-drawn illustration belongs to the artist, one of the club players, and I am using it with permission. The photo is mine.)

Have you had experience yourself with running games for kids? Playing games as a kid run by an adult? Tell us about it in the comments.